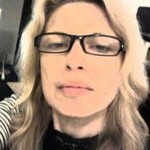 Originally from the UK Lynda Stevens has been living and working on a freelance basis in Budapest, Hungary since 2000, after first having worked here as a teacher in 1996. The link to her artist statement can be found here.

She originally graduated with a degree in English/Italian literature from the University of Warwick in 1981 – at a time where there were 500 graduates to 1 job. As a result her career took a rather more circuitous route than otherwise – this did include devoting a lot more time to the creative path. Stevens had developed a passion for drawing intensely patternistic colour drawings from the age of 19, on a purely self-taught basis, in a style that had been likened to ‘outsider art.’ However, soon it became impossible for this artist to be linked to any kind of naive label in art. In the mid 1980’s, in order to have a purpose to life whilst looking for paid work she did  also attend two two-year, part-time courses. The first involved a diploma in drawing and painting at the Leamington College of FE Leamington Spa, where she was introduced to the rigours of life drawing, still-life drawing and painting, alongside having the opportunity to experiment with a much wider range of media including etching, airbrush painting, charcoal and acrylics. There were also lectures introducing its attendants to the theory and the history of art. The second course undertaken at the end of the 80’s led to a certificate in Craft Materials from Coventry University, where media ranging from metal to ceramics and textiles were explored. Life in Coventry was rewarding from the point of view of finding an artistic community: there were regular exhibitions with the self-named Dream Illustrators and the Hillfields Artist’s group. After completing the Craft Materials course, Stevens started working increasingly with found objects, ranging from broken glass to polystyrene. There were also two solo exhibitions in a small gallery above an art shop in Spon Street, Coventry, which charted Stevens’s maturing artistic expression – in using broken glass in many of her works for example, her style literally crystallised.

There was a short interlude where Lynda Stevens lived in Brighton and exhibited with a local Gallery, but in 1996 the decision was made to leave the UK for Hungary, in order to find a reliable and viable source of income once and for all. Since then it has sometimes seemed that teaching English as a foreign language eclipsed all dreams to live the creative life altogether, but it was never able to completely able to let go of that dream. In more recent years there has been more and more involvement in the alternative Budapest art scene, which tends to follow a more inclusive approach more open to self-taught artists. Since 2020 the pandemic has put a hold to much of this. However, since the end of 2021, Lynda Stevens is now represented in part by the Szentendre-based MiDo Galéria. Since then, there has been an auction event in Szentendre, and an exhibition in Vecsés, a town just outside Budapest.

Nowadays Lynda Stevens’s artwork consists of abstract mixed-media collage pieces, some on paper, using a bastardised marbling technique, onto which squares or triangles of other materials are added.  Canvas rather than self-created boards are now also used to create other, larger compositions, often incorporating cutouts from her paper-based collages. In both cases, her aim is to create highly textured pieces that capture light through the interplay of opaque and reflective surfaces, so that many of her completed works will present a very different impression on the viewer, depending on how they are viewed. Recently, this work was discussed and written about as part of a thesis by Adrienn Demeter, which can be read here.

Even more recently, Lynda Stevens’s work has been focusing more on experimenting with paint alone, in which acrylic and enamel pours are used as a background for splatter techniques, to create works intended to evoke deep space, starry firmaments and nebulae.

There are sectioned devoted to the original artistic expression Stevens was engaged in the drawing sections, where colours and patterns are juxtaposed in each composition. Her life drawing work is also featured on this site.

Finally, perhaps one of the most important achievements to come out from these varied creative endeavours – in addition to a substantial collection of large mixed-media compositions on board as well as the collections of coloured drawings and mixed-media collages – was the creation of a full 78-deck of tarot cards, along with a 40 000 booklet, which took over 10 years to complete. Recently each card has been edited and some samples, along with some more information about them, can be seen here.

Here is a link to my CV, giving dates of my exhibitions.